In honor of the 60th Anniversary of In God We Trust, 1956-2016. Because we are one nation under God, here is a repost of the history of our beloved motto. 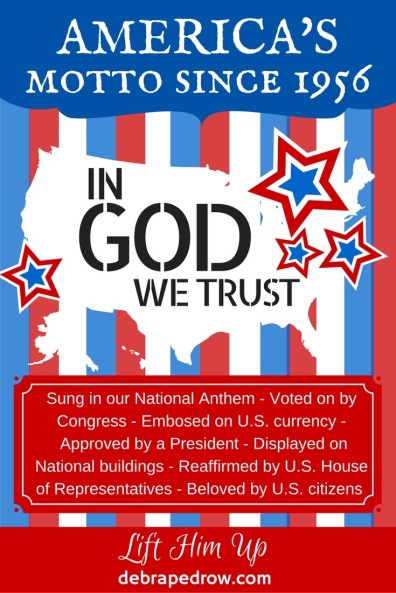 Belief in God is in our national history.

President Thomas Jefferson wrote, “The God who gave us life gave us liberty at the same time” and asked “Can the liberties of a nation be secure when we have removed a conviction that these liberties are of God?”

The need for our country to continually acknowledge these liberties from God, is established in our national motto.

“In God We Trust” – four words establishing our nation’s motto. History reveals it was:

“In God We Trust” is recognized in The Star-Spangled Banner. The song was written by Francis Scott Key in 1814. It was very popular with the military and eventually became our national anthem. Key writes the last stanza as: “…And this be our motto: In God is our trust. And the Star Spangled Banner in triumph shall wave, O’er the land of the free and the home of the brave.”

“In God We Trust” was a sentiment shared by both sides during the Civil War. Religious opinions were high. It seems many folks from both the North and the South thought God should somehow be acknowledged on our currency. A letter dated November 13, 1861, found in the Treasury Department is the first recorded example of the country’s concern. This letter was written to Treasury Secretary Salmon P. Chase, by a Rev. M. R. Watkinson, Minister of the Gospel from Ridleyville, Pennsylvania:

…One fact touching our currency has hitherto been seriously overlooked. I mean the recognition of the Almighty God in some form on our coins…”

Secretary Chase then wrote his own letter, dated November 20, 1861, to James Pollock, Director of the Mint at Philadelphia. Chase instructed Pollock to prepare a motto:

No nation can be strong except in the strength of God, or safe except in His defense…  The trust of our people in God should be declared on our national coins. You will cause a device to be prepared without unnecessary delay with a motto expressing in the fewest and tersest words possible this national recognition.”

“In God We Trust,” after a vote from Congress, first appeared on currency (two cent coin) in 1864.  The motto has been on all United States coins since 1938, but was officially approved by President Dwight D. Eisenhower on July 11, 1955 for all United States paper currency and coins.

“In God We Trust” affirms the strong history the United States of America has in recognizing God in our country:

“In God We Trust” became the official motto of the United States of America on July 30, 1956. The phrase comes from Proverbs 3:5, “Trust in the LORD with all your heart and lean not on your own understanding;”

“In God We Trust” was reaffirmed as the national motto in November 2011 when the House of Representatives passed a non-binding resolution (H.Con.Res.13) asserting its status as the U.S. national motto. It did so after President Barack Obama mistakenly referred to “E Pluribus Unum” as the nation’s official motto. The Republican sponsor of the resolution, Congressman Randy Forbes of Virginia, supports and encourages the display of “In God We Trust”. It was approved overwhelmingly 396 to 9, with two abstentions. [youtube https://www.youtube.com/watch?v=VmBHX6R-hsE]
Because of this positive vote, elected leaders and citizens have taken action to display “In God We Trust” in government buildings, courtrooms, schools and businesses . The Million Window Campaign is an initiative of the Congressional Prayer Caucus Foundation. If you would like to order the “In God We Trust” removable 4”x 5” window cling decal for your home, office or vehicle, visit  http://ingodwetrust.com

Trust in him at all times, you people; pour out your hearts to him, for God is our refuge. Psalm 62:8

Thankfully our country sees the need and the importance to publicly trust our Creator. Each time we trust in God, we lift up His holy name.

ORDER COPIES OF LIFT HIM UP DON’T PULL HIM DOWN @ LULU.COM OR AMAZON.COM FOR YOUR ADULT SUNDAY SCHOOL CLASS. COMMIT TO KEEP GOD’S NAME HOLY.