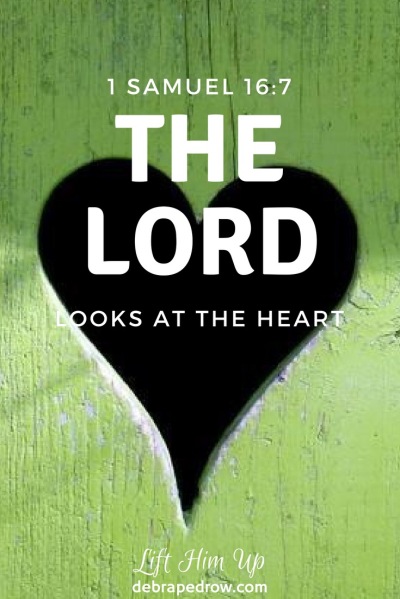 Israel longed for a king, as other nations had their kings. So God found favor in Saul, son of Kish. Though Saul reigned forty-two years, it did not take him long to disobey God by failing to completely destroy the Amalekites and all their possessions. Thus,  Saul fell out of God’s favor.

This action lead God to search for a new king, one with a heart God knew to be true.

While Saul was still king over Israel, God sent the prophet Samuel to Bethlehem. At God’s instruction Samuel was to fill his horn with oil and go anoint a new king – a son of Jesse. Samuel was not initially told by God that Jesse had eight sons or which son he was to anoint. So when Samuel saw Eliab,  Jesse’s oldest son who was tall and good looking in appearance, Saul thought he had found the right man for the job.

The LORD looks at the heart.  What Eliab looked like on the outside did not matter to God. Saul was tall, good looking and strong, but his heart was not true to God. God was now telling Samuel that Eliab’s heart was also not right with God.

So Samuel continued to have Jesse’s six other sons pass before him, none of which the Lord chose.  Samuel then asked Jesse, “Are these all the son’s you have?”

Jesse said his youngest son was tending sheep. So Samuel sent for the young shepherd named David, and they all stood until he arrived.  Although the Bible tells us David was “glowing with health and had a fine appearance and handsome features”, it was not his good looks God was after. It was David’s heart for God that positioned him as Israel’s king.

1 Kings 11:4 …and his (Solomon) heart was not fully devoted to the LORD his God, as the heart of David his father had been.

We can understand from scripture that as David grew from the youngest of Jesse’s eight sons, the shepherd boy,  his heart remained with God. And God being God who knows all things knew this to be true. God sought David because David’s heart was aligned with God.

This story inspires us to align our hearts with God. Why? Because when we open our hearts even the slightest bit to God, He rushes in and flows through us. Our bodies are warmed by Him, nourished by Him; He provides life that sustains us. And because of the blood Jesus poured out through His love, eternal life is promised to us.

Our God who created the inner workings of our hearts can not be fooled by a handsome appearance or strong back. The LORD looks at the heart to see who is devoted to Him.

Matthew 23:25 And Jesus, God in the flesh, can not be fooled either.“Woe to you, teachers of the law and Pharisees, you hypocrites! You clean the outside of the cup and dish, but inside they are full of greed and self-indulgence.

Like the false outward appearance of Saul, the Pharisees were false with their actions toward God. They made efforts to boldly display their religious practices for Israel to see, yet Jesus saw something deeper. He knew their acts were ignited by selfish intent. Outwardly their actions appeared righteous, but like Saul, their hearts exposed their true selves to Jesus.

We all sin and fall short of the glory of God. Even David, God’s choice for Israel’s king was guilty of sin through adultery and murder. But thankfully David came to God in prayer.

God listens to our words through a stethoscope. Every time we confess, apologize and repent – God hears and forgives.

And like the Pharisees, when we act by putting forth false actions, Christ knows. Jesus, the Judge of the living and the dead, hears everything through our hearts.

I encourage you to invite God into your heart right now. A blessed life in heaven will be your eternal reward!