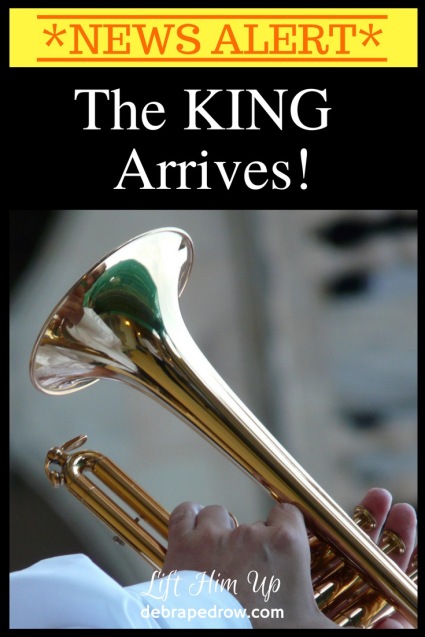 BREAKING — The Son of God, known as Jesus, was joyfully welcomed in Jerusalem for the Passover Festival by unprecedented crowds.  Masses lined the road to the city as the King approached, riding a donkey which has previously been unridden. The crowd laid their cloaks on the road for the donkey to walkover as all cheered, praising God saying: “Blessed is the king who comes in the name of the Lord!” and “Peace in heaven and glory in the highest!”

Though the initial entrance to the city was joyous, on a sad note it is reported the Savior was seen crying as He approached closer to Jerusalem. Records reveal His sorrow grows from the massive rejection Israel is about to bestow upon Him.

Circumstances reveal Passover generates travelers from far off lands, which causes a need for locals to exchange foreign monies. Immediately upon entering God’s outer Temple court, Jesus was seen trashing the tables of these money changers. Bystanders heard Jesus proclaim: “It is written,” he said to them, “ ’My house will be a house of prayer’; but you have made it ‘a den of robbers.’

Later in the same Temple courts amid skepticism, fear, and hate, the chief priests, teachers of the law and elders tried to trick Jesus by questioning Him about His authority. Persistent with His style, Jesus falls for none of their schemes and refuses to answer.

Jesus Is Still The Teacher.

In His own words, Jesus was heard sharing a parable about a farmer whose tenants killed his son. The son came to collect fruit from the vineyard, however, the tenants chose to kill him instead. Jesus then stated the owner will now come and kill the tenants who killed his son, and place the vineyard in another’s care.

The chief priests, teachers of the law and elders were quick to realize Jesus was referencing them as the tenants and immediately looked for ways to arrest Him.

Struggling with a way to trap The Teacher, religious leaders sent spies to question Him. Yet again, Jesus fell for none of their illicit tactics. When questioned regarding the need to pay taxes, Jesus replied: “Show me a denarius. Whose image and inscription are on it?” “Caesar’s,” they replied. He said to them, “Then give back to Caesar what is Caesar’s, and to God what is God’s.”

Still striving to scheme, the leaders offered a hypothetical scenario regarding a wife who was widowed from seven brothers. They wanted an answer to “Whose wife will she be?” at the resurrection.

In short, Jesus replied: He is not the God of the dead, but of the living, for to him all are alive.

Interesting, when The Teacher turned the tables on the religious leaders and asked them if the Messiah is the son of David, they had no reply. Soon after this question, The Teacher was heard warning His disciples about the teachers of the law. Jesus told how the teachers like to show-off praying in public places, yet devour widows’ houses.

In conjunction with the haughty teachers, Jesus referenced another poor widow who was seen placing two very small cooper coins in the temple treasury. In comparison to what the rich were giving, Jesus noted: “she out of her poverty put in all she had to live on.”

What The Future Holds.

As disciples continue to struggle with fully understanding all The Teacher says, Jesus offers them information to a complex future:

However, Jesus promises not a hair on their head will perish. When signs from the moon and the stars come, the time will be that the Son of Man returns. Jesus claims victory for those who listen to His words. 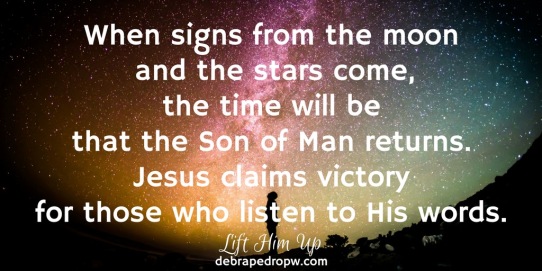 It remains to be seen who will continue to follow the Son of God, but as for now, people are still arriving early in the mornings at the temple to hear The Teacher teach.

Crucial information regarding one of the original Twelve, Judas, confirms Satan has entered his body.  Witnesses confirm Judas went to the chief priests and officers of the temple guard to discuss how he will betray Jesus. Payment in the amount of thirty pieces of silver – the accepted  payment for a slave’s accidental death, was agreed upon.

Around this time, Jesus sent Peter and John into Jerusalem to prepare for their Passover feast. Israelites agree Passover commemorates the night the Israelites were freed from Egypt; when God “passed over” homes marked by the blood of a lamb without defect, while killing first borns in all unmarked homes. Unbeknownst to Peter and John, they are following The Lamb who will free all people from their sin.

Stay informed! Follow the final briefing of Jesus’ situation in Jerusalem on April 13.

***Thank you for following the continuing story of Jesus’ life as reported by debrapedrow.com, from the “orderly account” of the gospel of Dr. Luke.