BREAKING — Today, as reported exclusively by Dr. Luke, Jesus the teacher moved forward sharing more truths of God through parables to his disciples. The topic – Money! One notable story describes a manager accused of wasting his rich boss’ money.

Fearing for his future wellbeing, while knowing he is about to be fired, the shrewd manager made deals with his master’s debtors. He carried out this act selfishly so as to be welcomed into the defaulters’ homes upon his own imminent unemployment.

The manager cut a nine hundred gallon olive oil debt in half. He also cut a thousand bushel of wheat debt down to eight hundred. Upon hearing this lowering of debts, the rich man unexpectedly became pleased with his employee’s cleverness, however, there is no report the dishonest man was hired back. (Experts believe the rich man also to be “shrewd” in his own business deals.)

In His own words, Jesus ended the story by stating: “Whoever can be trusted with very little can also be trusted with much, and whoever is dishonest with very little will also be dishonest with much. So if you have not been trustworthy in handling worldly wealth, who will trust you with true riches? And if you have not been trustworthy with someone else’s property, who will give you property of your own?

Per Jesus’ intention, that statement was heard by Pharisees who love money! Witnesses reveal the Pharisees consequently sneered at Jesus for his remarks. Unaffected, Jesus replied, “You are the ones who justify yourselves in the eyes of others, but God knows your hearts. What people value highly is detestable in God’s sight.”

At the center of Jesus’ parable of a sore covered lame beggar named Lazarus who sits at the gate of a selfish rich man who offers no mercy… is again Money! The love of money over human kindness.

Slammed with the reality of spending his eternal life in Hades for refusing to help those in need while Lazarus spends eternity with Abraham in heaven, the uncharitable rich man suffered thirst.  Surprisingly, his concern for the future eternity of his five brothers was then revealed to Abraham.

Abraham offered a simple solution for them to avoid the same fate: Listen to Moses and the Prophets.

The Number Seven And A Tiny Mustard Seed. 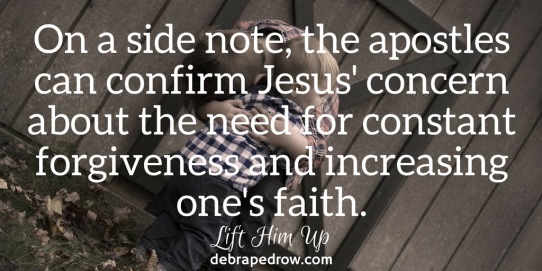 On a side note, the apostles can confirm Jesus’ concern about the need for constant forgiveness and increasing one’s faith.

On forgiveness they report Jesus said, “Even if they sin against you seven times in a day and seven times come back to you saying ‘I repent,’ you must forgive them.”

And regarding faith Jesus is quoted as, “If you have faith as small as a mustard seed, you can say to this mulberry tree, ‘Be uprooted and planted in the sea,’ and it will obey you.”

Nine Out Of Ten Men Are Unthankful.

Amid His travels to Jerusalem, Jesus recently met ten men with leprosy. Keeping their distance, they were persistent to shout to the Master for pity. It is confirmed Jesus instructed them to go and show themselves to the priest, since health laws require the priest to acknowledge the validity of this dreaded condition.

Upon confirmation of their miraculous healing, only one of the ten returned to Jesus, throwing himself at Jesus’ feet in thankfulness. A crucial bit of information is this man is a Samaritan (a race despised by Jews as half-breeds).

National conversations continue pertaining to the arrival of God’s Kingdom. Jesus boldly proclaims the status of this action will remain unknown to mankind. He also includes instruction on not following false prophets regarding this matter.

Comparing this situation to Noah and Lot’s time when folks were eating, drinking, marrying, buying, selling, planting and building up until the last minute, the return of God’s Kingdom remains an unspecified date.

However, in His own words Jesus reports, “For the Son of Man in his day will be like the lightning, which flashes and lights up the sky from one end to the other.”

***Thank you for following the continuing story of Jesus’ life as reported by debrapedrow.com, from the “orderly account” of the gospel of Dr. Luke.