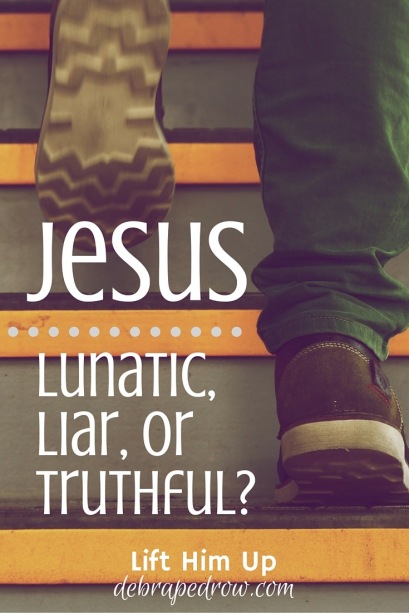 Jesus was looked upon as a “Teacher” (John 13:13) during the last three years of His life on earth as He purposefully taught the Word of God to many peoples. But it is the  fact that His teachings were extremely bold that should inspire us to make a clear decision about who The Man really is.  Referencing Him as one who teaches does not measure up to the Truth of His being; and this simple acknowledgment  will not secure for us our inheritable heavenly eternity.

We have to go deeper.

As Jesus traveled about during those three years, walking approximately 3000 miles around the areas of Galilee, Samaria and Judea, he explained and lived God’s Word to all who had ears to hear and eyes to see (Matthew 13:16-17).

Jesus did not simply read scripture, He claimed identity to it!

On a Sabbath day while in Nazareth, Jesus went to the synagog (as was His custom) and read from where He selected on a scroll:

Luke 4:18-21 “The Spirit of the Lord is on me, because he has anointed me to proclaim good news to the poor. He has sent me to proclaim freedom for the prisoners and recovery of sight for the blind, to set the oppressed free, to proclaim the year of the Lord’s favor.”

Then he rolled up the scroll, gave it back to the attendant and sat down. The eyes of everyone in the synagogue were fastened on him. He began by saying to them, “Today this scripture is fulfilled in your hearing.”

Jesus’ personal statement at the end tells us He was claiming to be the Messiah – The One who will save Israel! Lunatic, Liar, or Truthful?

Throughout the beginning of the Book of John, Jesus makes reference to His Father (John 5:16-30) as He preforms miracles on the Sabbath. The Jewish leaders addressed and taught others to esteem God’s name as holy, but Jesus took the practice much further.

Jesus claimed He and God were One in the same! Lunatic, Liar, or Truthful?

Caiaphas was the high priest leader of the religious group called the Sadducees whom Jesus was brought before to be questioned. Sadducees hated Jesus because His message as the Son of Man was a message they could not accept.

Mark 14:61-62 But Jesus remained silent and gave no answer. Again the high priest asked him, “Are you the Messiah, the Son of the Blessed One?” “I am,” said Jesus. “And you will see the Son of Man sitting at the right hand of the Mighty One and coming on the clouds of heaven.”

Caiaphas understood from scripture (Psalm 110:1) that whoever sat at the right hand of the LORD had power. This meant Jesus’ confirmation of His deityship included Jesus would one day judge the high priest! Lunatic, Liar, or Truthful? 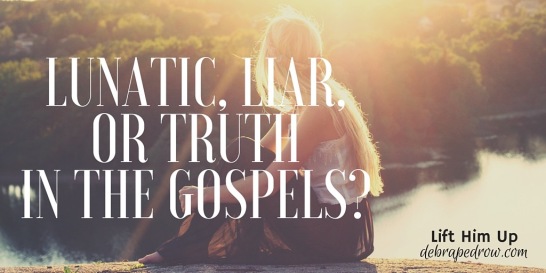 Lunatic, Liar, or Truth in The Gospels?

Jesus was buried in a nearby empty tomb by Joseph of Arimathea and Nicodemus. The two men applied myrrh and aloes to Jesus’ body and wrapped Him in strips of linen. Mary Magdalene and Mary the mother of James and Joseph came and saw how Jesus was laid. Then Joseph rolled a stone against the entrance.

Jesus the person, who claimed: identity from scripture, the essence of the God, the Son of Man and final Judge to all – was dead and lying in a tomb. But death could not contain this “man.”

Three days later Jesus rose from the grave. But before His ascension to heaven, He revealed His glory over a forty day period many times and to many different people demonstrating He truly was alive:

These things are written in Bible so that all may read and believe that Jesus was neither a lunatic or a liar, but truthfully the Son of God.

John 3:36 Whoever believes in the Son has eternal life, but whoever rejects the Son will not see life, for God’s wrath remains on them.

To understand the misuse of OMG and Oh my G**! order my book – Lift Him Up don’t Pull Him Down, @ Lulu.com or Amazon.com.