Not Feeling The Love From My Nostalgia Network.

The title is rhetorical. TV Land needs to offer no written response to this question. Their answer comes in the form of a new television series scheduled to air this month. It’s a show referring  to a respected profession from which so many creative/ingenious script ideas could have developed. But their writers chose to go the lowbred/tasteless route, obviously assuming their TV Land audience requires no ethical or clever scripts  to be entertained. Thankfully, many viewers disagree.

All italicized comments are taken from the TV Land webpage:

You read that right! That viewer heard what I heard in the commercials. The writers  decided they would add “comedy” to their clumsy script by having a child, I’m guessing about age ten, exclaim the name J**** C*****! in “comedic” exasperation.

Yes, I understand this program is aired later at night, while children should be sleeping in their beds. TV Land’s allotted time slot provides for children to more than likely not be watching this exhausting show. But so what? The idea that young children should not be awake at this time, does not erase the fact that script writers chose to have this young actor take our Lord’s name in vain. The name we Christians love and adore. Or, that producers, executives, and yes parents, ok’ed this child to be sacrilegious. A word no doubt this impressionable young actor does not know the definition or consequences of.

I choose not to watch this show. The decision was made easily after viewing its very short commercials. Commercials which viewers have no control over when they will pop up on tv-screens. Here is another comment from TV Land webpage:

These comments were submitted to the webpage before the show even aired. They are all the result of TV Land’s vomited commercials. There are many shows I really enjoy watching on TV Land: Andy Griffith Show, Everybody Loves Raymond, Family Feud, Reba, just to name a few. All entertaining and funny shows. Has society changed that much through the years, that we no longer accept clean, family farce as humorous and engrossing? The answer to that question has to be No, otherwise those shows I listed, plus many more, would not still be in syndication.

I know not everyone is attracted to the same type of humor, but doesn’t TV Land apply any quality standards to their new programing? The viewers who wrote these comments on the TV Land webpage must believe as I do: TV Land drastically lowered the value bar when selecting new programing for their viewing audience.

This show centers its jabs, like many before it, on an entire profession. I am not in the selected profession, however I did read many comments on the TV Land website from folks who are. And some of them praised the show. Although I am pointing out I feel the stories in this program are insulting to teachers, I will leave it up to the profession to voice opinions on that matter. This post is written specifically to proclaim the misuse of our Savior’s name. 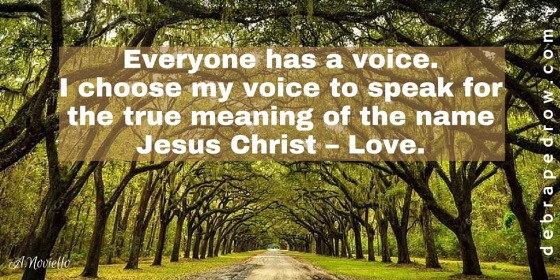 Jesus was born to die. He was without sin, yet gave His life for our sins. The sacrificial lamb [Jesus—God in the flesh] had to be pure to take on the sins of humanity at the Cross. And because humans all sin, God’s only choice was God Himself to be the sacrifice. Otherwise, mankind would suffer eternal separation from God, because breaking The Law requires punishment. God sent Jesus to carry ALL our sins to the Cross, thus saving us from eternal separation from God. We have salvation from damnation by faith and belief in the name of Jesus Christ.

Salvation is found in no one else, for there is no other name under heaven given to mankind by which we must be saved.  Acts 4:12

This show titled TEACHERS, can be found at: http://ow.ly/X3Ook.

If you viewed the television ads for this show and heard  J**** C*****, our Savior’s name who suffered as He died while being crucified on The Cross for all the world’s sin, used as comedic blasphemy and you are heartbroken and offended by this exclamation, please visit TV Land’s website http://ow.ly/X3Ook . Write a comment on their site as to why you were offended and leave them a short message about theTruth of our Lord’s name.

If not you then who? Who will stand up for our Christian values and create the change towards keeping His name holy? This is an easy task, and I thank you for lifting Him up!

Also, you can join the movement and click the Break The Chain tab above now! Share your commitment to G-O-D and not taking our Lord’s name in vain. Break the chain of OMGs and lift Him up in the glory that God alone deserves.