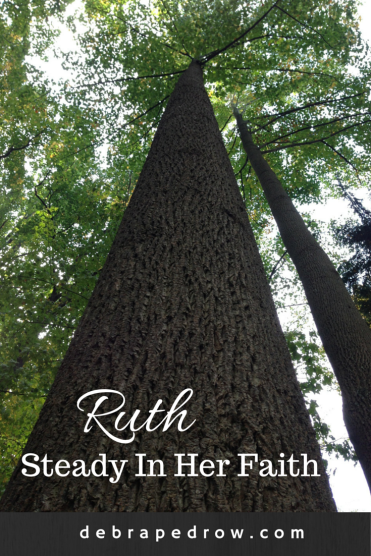 (My home church is participating in the study of THE STORY – The Bible As One Continuing Story Of God And His People. Foreword by Max Lucado and Randy Frazee. Each week, my Thursday post will focus on our current study chapter.)

This lesson is dedicated to the character of one woman – Ruth, a Moabitess. Ruth was a women loyal to her loved ones. She proved this quality in many ways.

Ruth was also a hard worker,  overcoming any fear of working as an unfamiliar female in a man’s world.

Because of all she did for her mother-in-law, Ruth found favor in the eyes of the barley field owner. His name was Boaz, and he happened to be a distant relative of Naomi.

Ruth always did as she was told. So when Naomi sent Ruth at night to sneak in the threshing floor and lie at Boaz’s feet, she obeyed. This act of true kindness so pleased the elder Boaz, that he wanted to marry Ruth. But first, following tradition, he had to check with a certain male family member who was a closer relative to Ruth than Boaz. This particular relative had first option before Boaz, to marry Ruth since her husband was dead.

As the Lord planned, the first in line relative chose not to marry Ruth, so Boaz was free to take her as his wife. Ruth bore Boaz a son, who they named Obed. Obed became the father of Jesse. Jesse became the father of David, the shepherd boy turned mighty king. And from the line of king David, Jesus was born.

The story of Ruth tells us God accepts all who believe in Him.

Then Peter began to speak: “I now realize how true it is that God does not show favoritism but accepts from every nation the one who fears him and does what is right. Acts 10:34-35

And He blesses us according to His plan, because of our faithfulness.

2 thoughts on “Ruth – Steady In Her Faith”